Vissza ide: I am at home 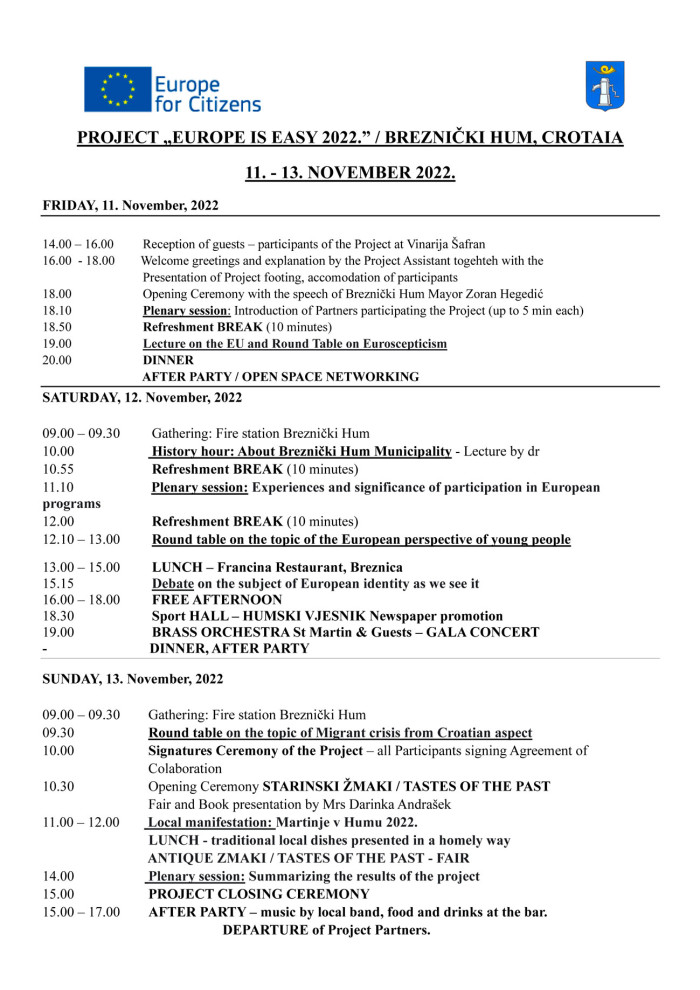 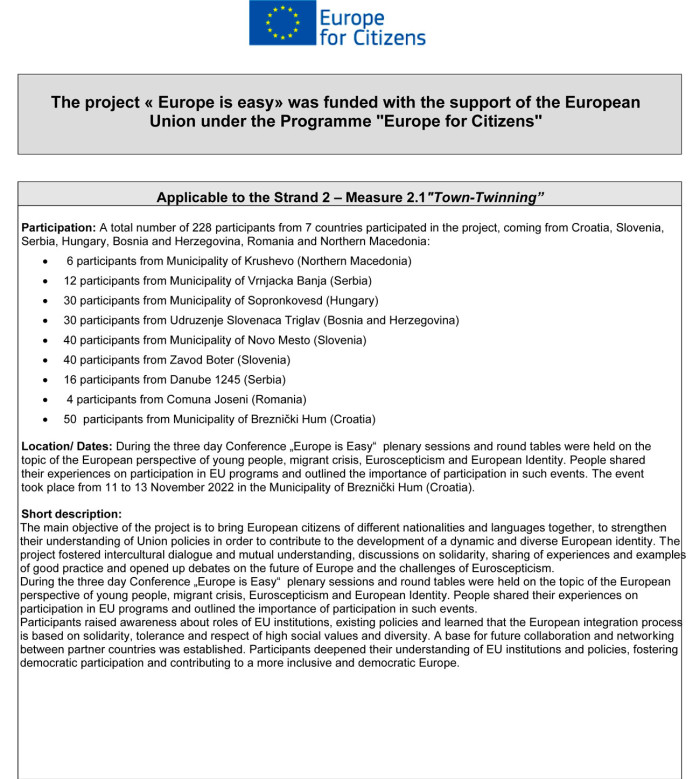 Breznički Hum – host to the Project "Europe for Citizens"
During middle November, the municipality of Breznički Hum hosted the European project "Europe for citizens - simple Europe", with the participation of representatives of 7 countries supported by the European Union. As many as 250 Hungarians, Romanians, Slovenians, Serbs, Bosnians, North Macedonians and Croats took part in the implementation of the "Europe is easy" project, which was postponed twice due to the pandemic, but was finally carried out in November this year during celebration of Breznički Hum Municipality Day.
- We were able to fully implement this interesting project thanks to the cooperation with all the municipalities and cities that were involved, so now we will collect impressions and experiences and will note what we learned, and will then send it to the European Commission – the mayor of Breznički Hum Zoran Hegedić pointed out.
- We are particularly proud of the fact that, as the project's holders, we focused on Euroscepticism, in order to analyze and receive first-hand feedback on this topic inside and outside countries - members of the European Union - said Hegedić, emphasizing that non-members were also involved in this EU Project such as Serbia, Bosnia and Herzegovina and Northern Macedonia.
The Project implementation program included the reception of guests at local Winery with a brief presentation of all participants from the Macedonian Kruševo, Slovenian Novi Mesto, Serbian Vrnjačka Banja and Sremski Karlovac, Hungarian Sopronkovesd, Bosnian Banja Luka and Romanian Joseni municipality, together with Croatian host Breznički Hum.
Originally, a Round table on the topic of Euroscepticism was held in Cultural Center Novi Marof, after which the guests were introduced to the folk customs of the St. Martin's Day local celebration through an appropriate program on "Martinje in Marof", organized by the local Tourist Board. Experiences and the importance of participating in European projects usually result with concrete effects, this time with the presentation of a book of vintage recipes, based on the experiences of local housewives, of author Dr. Darinka Andrašek. The European perspective of young people and the European identity as we see it were also presented by the hosts, connecting these themes with a literary and poetic performance by the Humščak Culture Association, and a Saturday evening Gala Concert by Sveti Martin Brass Band and guests. The last day of the Project's implementation was spent with the ceremony of signing the Agreement on future cooperation between the Project's partners, and a very attractive cultural and artistic program
The inhabitants of Hum and their guests could see the traditional Martinje and Prigorje-Zagorje Fair and then enjoy the flavors at the Starinski Žmaki event with an offer of local dishes, which can rarely be tasted anywhere else.
We would also point out that the Project participants went home after a four-day stay in Breznički Hum municipality which has a wealth of experience in ten years of implementing European projects, expressing their satisfaction and confidence in meeting again.